This wiki is currently in the proccess of moving from the now ruined old Teletubbies Wiki.

If there is anything on the old wiki and you don't see it here then just duplicate it here. NO BANNED CHARACTERS! 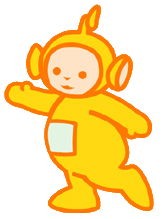 Here at The Teletubbies And Their Fellow Friends Wiki, we aim to provide our visitors with information on all the different aspects of the hit CBBC Television series, Teletubbies, which originally ran from March 1997 - January 2001, 2002 - present on Cbeebies in the UK and lasted for over Three hundred and sixty five episodes. Then it aired in the US on PBS Kids in April 1998 until June 2005. PBS News said that on 2 January 2012, Teletubbies will be returning to PBS Kids along with other shows that had been off the air. This wiki covers characters, locations, objects and everything else to do with Teletubbies. On The Teletubbies And Their Fellow Friends Wiki, you can add any article that doesn't already exist. The wiki allows anyone to create or edit any article, so we can all work together to create the wiki.

The Teletubbies will give you free Tubby Custard and Tubby Toast if you help out!

Community content is available under CC-BY-SA unless otherwise noted.
Advertisement